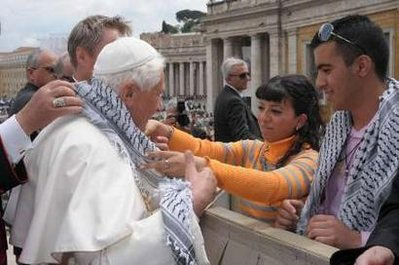 While the Pope's speech at Yad Vashem left much to be desired, he had no such restraint when speaking at a "Palestinian" refugee camp. Speaking before Israeli officials, government representatives and Holocaust survivors at the Yad Vashem memorial in Jerusalem, the Pope could not bring himself to mention the words "Nazis", "murdered" or "six million", nor did he apologize for the silence of the Vatican during the war, and its apathy to the plight of the Jews. The chairman of the Yad Vashem Council, Rabbi Yisrael Meir Lau, who is a Holocaust survivor, expressed disappointment at the pope's speech, saying that "there certainly was no apology expressed here. Something was missing. There was no mention of the Germans or the Nazis who participated in the butchery, nor a word of regret," Lau said. "If not an apology, then an expression of remorse."

Despite this, the Pope did not hold back in his call for an Arab terror state in the heart of the land of Israel and the return of the Jewish people to exile. Speaking before Fatah arch-terrorist Mahmoud Abbas, the Pope declared his support for "a sovereign Palestinian homeland in the land of... [their] forefathers". He used the opportunity to criticize Israel over erecting a security fence designed to prevent Islamic suicide bombers from blowing up Jewish men, women and children in cafes, restaurants and discotheques, a security fence only made necessary by relentless Islamic terror. Abbas, who is constantly referred to as a "moderate" in the West, used the opportunity to lament "the Nakba [catastrophe] 61 years ago" ie. the founding of the State of Israel. Straight from Yad Vashem, the Pope allowed himself to be used as propaganda for those who seek to delegitimize and demonize the Jewish State. PA spokesmen used the Pope's visit to reiterate the Arab "right of return", the flooding of Israel by Arab refugees with the intention of demographically destroying the state.

The Pope's pilgrimage is a case study in hypocrisy, falsehoods and lies. The Pope may have cried crocodile tears at Yad Vashem but he is far from expressing remorse over the Holocaust. His Church has been consistent in whitewashing its wartime record, reinstating Holocaust-denying bishops, promoting ludicrous and obscene comparisons between the Nazis and the IDF, as well as supporting the Durban II conference, in which a Holocaust-denying and genocide-enabling leader was the keynote speaker. The Pope has launched a campaign to exonerate Pope Pius XII, the Pope who closed his eyes as the Jews of Rome were round up from beneath his window, without hurting Jewish sensitivities. The Pope caused a huge scandal when he lifted the excommunication against a bishop who stated that there is no proof that gas chambers ever existed, and only relented after international outcry. Cardinal Renato Martino, the head of the Vatican Council for Justice and Peace and a former Holy See envoy to the United Nations, provoked an uproar when he repeated the revisionist libel that Gaza today resembles a Nazi concentration camp. In addition to this damning record of Holocaust-denial, obfuscation and unwillingness to confront the past, he met with Fatah leader Mahmoud Abbas, whose doctoral dissertation questions the veracity of the Holocaust and argues that Zionist leaders collaborated with the Nazis in the extermination of European Jewry. He writes in his thesis: "It seems that the interest of the Zionist movement, however, is to inflate this figure [of Holocaust deaths] so that their gains will be greater. This led them to emphasize this figure [six million] in order to gain the solidarity of international public opinion with Zionism. Many scholars have debated the figure of six million and reached stunning conclusions—fixing the number of Jewish victims at only a few hundred thousand."" This "moderate" Holocaust denier was also involved in the 1972 murder of Israeli athletes at the Munich Olympics, and countless other terrorist attacks.

The Vatican has consistently promoted the internationalization of Jerusalem and taken a pro-"Palestinian" stance. It was only in 1993 that the Vatican recognized Israel. The reason for this hostility is that the State of Israel and Jewish sovereignty over Jerusalem poses a tremendous theological problem for Catholicism. Church doctrine taught for millenia that Jews were "the witness", cursed to wander without a home as proof of their rejection of Jesus, and that they would never return to Israel. In 1948, and then again in 1967, an enormous issue was raised for theologians. By expressing support for a "Palestinian" state in the "land of their forefathers", the Pope is continuing this same deadly replacement theology. One would think that the supreme pontiff of the Catholic Church would at least have a cursory knowledge of Scriptures, which says quite clearly that the Land of Israel belongs to the Jewish people. He must certainly be aware that there has never in history been a sovereign "Palestinian" state, nor was there ever a distinct "Palestinian" people, culture or entity. In fact, the "Palestinian people" were invented only in 1967 when it became apparent to the Arabs that a new strategy had to be devised to throw the Jews into the sea. Certainly the world's oldest people, with ties going back to the Bible, over 3500 years ago, should not be expected to give up its homeland to make room for the world's newest people, an artificial entity created 42 years ago. The people today referred to as "Palestinians" are squatters and invaders, having arrived in the 1900s from Jordan, Egypt, the Maghreb and Syria, attracted by the increased living standards caused by renewed Jewish settlement in Israel.

The Vatican has a lot of chutzpah. The original Jewish olim from Eastern Europe left for Israel because Church-taught hatred had made life so miserable for the Jewish people. During our entire sojourn in Catholic lands, we never had a moment of rest as we were persecuted and oppressed. The Church taught that Jews were wicked, sons of satan, and forced them to wear distinctive clothing and live in ghettos. Thousands of Jews perished at the hands of crusading swords or on the racks of the Inquisition. Entire communities in France and Germany were wiped out during the Crusades as mobs burst into Jewish homes and demanded: "Kiss the cross or kiss the sword!" The Holocaust, the most horrendous crime humanity ever committed, was only possible because of the two-thousand years of Christian anti-semitism. After watching the Oberammergau Passion Play in 1934, Hitler said out loud: "Perhaps I am rendering to Christianity the best service ever!" Having left, for the most part, Catholic lands for our own soils, the Pope has now followed us, demanding that we give up our land. Jews left Christendom yet Christendom has chased after us, pointing us back to the exile, to subjugation and lowliness.

I would like to point the pontiff to the Book of Joel. He would be wise to read and digest the fourth chapter, which speaks of the fate of those who divide up G-d's land. "For behold, in those days and in that time when I return the captivity of Judah and Jerusalem, I will gather all the nations and I will take them down to the Valley of Jehoshaphat, and I will contend with them there concerning My people and My heritage, Israel, which they scattered among the nations, and My land they divided... And Egypt shall become desolate, and Edom shall be a desert waste, because of the violence done to the children of Judah, because they shed innocent blood in their land. But Judah shall remain forever, and Jerusalem throughout all generations. Now should I cleanse, their blood I will not cleanse, when the Lord dwells in Zion." 61 years after the return of Jewish independence, and 62 after the liberation of Jerusalem, Judea and Samaria, the world still disputes our rights to our home. We must not fear since even when Edom ie. the Church and the West will be a "desert waste", "Judah will remain forever!" Pope may come and go, but the Jewish people are firmly planted in their homeland.
6:27 PM
lovelipby
anti-semitism , Anti-Zionism , Fakestine , German Tshuva , Jewish Israel , two-state (final) solution , Vatican