One Land for One People 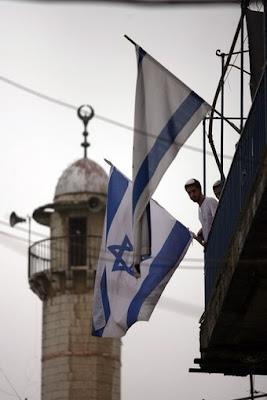 At Bar-Ilan, Binyamin Netanyahu laid the foundations for a Palestinian state. Along with that, he unwittingly nullified the Jewish State. Netanyahu outlined his vision for the Middle East: "In my vision of peace, there are two free peoples living side by side in this small land, with good neighborly relations and mutual respect, each with its flag, anthem and government, with neither one threatening its neighbor's security and existence."

Netanyahu's speech detailed the deep Jewish connection to the Land of Israel and attempted to correct many of the fallacies and inaccuracies contained in Obama's Cairo address. To thunderous applause, Netanyahu proclaimed that "the connection of the Jewish People to the Land has been in existence for more than 3,500 years. Judea and Samaria, the places where our forefathers Abraham, Isaac and Jacob walked, our forefathers David, Solomon, Isaiah and Jeremiah, this is not a foreign land, this is the Land of our Forefathers... The right to establish our sovereign state here, in the Land of Israel, arises from one simple fact: Eretz Israel is the birthplace of the Jewish People." Yet for all the powerful and refreshing Zionist rhetoric, Netanyahu undermined all of this with his call for a Palestinian state east of the Jordan.

The very existence of a "Palestinian" people negates the basis of Zionism. The age-old Jewish dream of being a free people in its own land stands in stark contradiction to the claims of the "Palestinians". Either Israel belongs to the Jewish people or Palestine belongs to the Arabs. If the land is the historical birthplace of the Jewish people, promised to us by G-d and redeemed and rebuilt in recent generations through Jewish blood, sweat and tears, then no other people has a claim of ownership. On the other hand, if "Palestine" exists, then the Jews are invaders and usurpers, colonizing a foreign land which they have no right to. There can be no two sides in this conflict: either there is an Israel, or there is a "Palestine:".

From its very inception, Zionist leaders understood this. Only 30 years ago, Golda Meir argued that "there is no such thing as a Palestinian!" One of the early Zionist slogans was that Israel was "a land without people for a people without a land". Of course during the long two-thousand year exile when the majority of the Jewish people were prevented from returning home did foreigners come and settled in the land- but only as individuals, and never as a people. At no point before 1967 did the Arabs living in Israel consider themselves part of any people other than the greater Arab nation, and certainly not as a distinct "Palestinian" entity. Never was there an independent "Palestinian" state, nor was there ever a struggle or a demand for one, until Israel liberated Judea and Samaria. When Egypt and Jordan occupied Gaza, Judea and Samaria illegally for 19 years, there was no movement by the Arabs in these areas for a "Palestinian" state. In short, the concept of a "Palestinian" people is crock, a fallacy and a fraud, product of historical revisionism designed to demonize and delegitimize the Jewish state. By accepting, at least partially, the validity of "Palestinians", Netanyahu has unknowingly rocked the foundations of Israel.

Despite the majority of the Jews being carried off by the Romans, never did we relinquish our right or title to the Land of Israel. Jews maintained a constant presence in Israel since biblical times and in each subsequent generation, they sought to re-establish themselves there. No other people ever took roots or built a state in the land, and no other nation ever called out longingly and with intense yearning for two millenia, for her, saying "Next year in Jerusalem!".

The borders outlined for a "two-state solution" are purely artificial borders, created arbitrarily. Judea and Samaria have no special significance to the Arabs, yet it is the land where Abraham, Isaac and Jacob roamed, where David fought and conquered, and where Isaiah and Jeremiah prophesied. An Israel cut off from its biblical roots has absolutely no justification to exist. Without these lands, Israel will be a body, but devoid of a heart or a soul. The Arabs have been blessed with 22 states and vast wealth- let them create a 23 state for the "Palestinians" there. Jordan was originally part of the "Mandate for Palestine", and has a majority of "Palestinians". Therefore, it is fitting for "Palestine" to be created in Jordan, yet there is no justification for the Jewish people to surrender their homeland to create a country for a foreign nation of squatters.

It is the right of the Jewish people over generations, a right that under no conditions, can be cancelled. Even if Jews during a specific period proclaim they are relinquishing that right, they have neither the power nor the authority to deny it to future generations. No concession of this type is binding or obligates the Jewish People. Our right to the country - the entire country - exists as an eternal right and we shall not yield this historic right until its full and complete Redemption is realized."

It was Israel's first Prime Minister, David Ben-Gurion, who said this, because he understood that every single concession and territorial withdrawal meant that another nation had a claim on the Land of Israel. A "Palestinian" people negates and contradicts the Zionist dream, because it implies that some other nation established itself in the land of Israel. Only by virtue of our historical ties and divine promise can Israel exist, and if this is the case, there is no room for a foreign national movement in the Land of Israel. Either the Land is the eternal inheritance of the Nation of Israel, or it belongs to the Arabs, and specifically to the "Palestinians". Event as late as 2002, Netanyahu, speaking before the Likud Central Committee, recognized this. "Ultimately, the historical accounts are clear: Yes to a Palestinian state means no to a Jewish one. And yes to a Jewish state means no to a Palestinian one." Indeed, Mr. Netanyahu, indeed.
1:19 PM
lovelipby
Anti-Zionism , Fakestine , Jewish Israel , Judea and Samaria , zionism