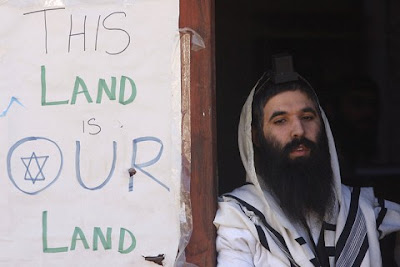 Perusing my local bookstore, I found the shelves replete with anti-Israel books. Besides trashing Israel and its supporters, the basic idea of these books was that the concept of a Jewish state is illegitimate and that Zionism has no place in the modern world. Some even had the chutzpah to suggest that a Jewish state is against Jewish values!

Sadly, it is becoming increasingly commonplace among pseudo-intellectuals and supposedly liberal thinkers to question to right of the State of Israel to exist. Consider the recent conference at Toronto's York University, "Israel/Palestine: Mapping Models of Statehood and Paths to Peace", which, packed with anti-Israel speakers, based itself on the premise that Israel must be dismantled as a Jewish state and reconstituted as a bi-national one. In university campuses across the United States, Israel's Jewish character is constantly debated, condemned and defamed, returning us to the infamous 'Zionism = Racism' UN resolution.

Israel is the only country that 61 years after its founding, has its rights right to exist questioned. Similarly, Jews are the only people whose right to statehood and sovereignty is a matter for debate. The incredible irony is that of all the countries in the Western world, Israel is the only one that has the same people living in the same territory, speaking the same language, practicing the same faith, as it did 3000 years ago. No other country can boast anything similar. Long before Spain was Spanish and while Rome was still a collection of villages along the Tiber, Israel was Jewish and Jerusalem its capital and spiritual center. Jewish statehood and self-rule in the Land of Israel is completely natural, something that cannot be said about the other countries in the region. The modern map of the Middle-East was carved up by British and French imperialists after WWI, creating artificial countries such as Jordan (originally 'Transjordan'), Saudi Arabia, or Iraq. No Jordanian people appears in the annals of human history, having been invented when the British first carved up the Land of Israel in 1921. Iraq is simply the result of the British combining three distinct Ottoman provinces and forcing three separate ethnic and religious groups into an unwanted union.

Rather than combatting this dangerous historical revisionism, the Israeli government pursues policies that encourage, validate and exacerbate these beliefs. By dismantling outposts and evicting Jewish families from their hilltop homes in Judea and Samaria, the Israeli government sends the message that Jews are merely interlopers, with no real reason to be in Israel. As a result of Arab and Iranian propaganda, reinforced by President Obama's naivete, millions of Arabs and Muslims believe Israel to simply be the result of European guilt over the Holocaust and that it was simply luck that had the Jews set up a state in Israel rather than Uganda of Upstate New York. The Israeli government is unfortunately too blind to see that the key to peace is more, not less, Jewish communities in Judea and Samaria, and a recommitment to a Jewish presence there. This would force the Arab rejection of Jewish historical rights and peoplehood, which is the heart of the conflict, to end.

Our right to Maoz Esther and Alon Shvut is the exact same as our right to Tel-Aviv and Jerusalem. It is time for Israel's leaders to realize that in the eyes of even the "moderate" Arabs, both are illegitimate and that the only proper place for Israel in the Middle-East is in the sea. To combat the anti-Zionist zeitgeist sweeping the United States and Europe, Israel must unequivocally assert that the Land of Israel belongs exclusively to the Jewish people, by right of history, politics, conquest and divine bequeathal. Israel has no need to be ashamed of its Jewish characters. In a world of 22 Arab states, 57 Islamic states and several that define themselves as "Islamic republics", it is the height of hypocrisy to claim that a Jewish state is somehow racist. The charges of racism and apartheid have no grounding in fact but are a tool of Leftist and Islamic propaganda to defame and demonize Israel.

Israel is the nation-state of the Jewish people. There is no reason for its existence except as the homeland of the Jewish people. Zionism is the natural expression of two thousand years of Jewish longing to return home, to rebuild their country frol which they were forcibly removed by Roman centurions and legionnaires. Israel has no need to apologize for this but must stand firm and proud at its incredible accomplishments. The point of Zionism was never really to end anti-Semitism but to be able to tell anti-Semites to bugger off. Israel must tune out the voices of hate and condemnation that echo from the farce that is the UN, from the despots and tyrants of the Islamic and Third-Worlds, from the Loony Left and Extreme Right. The Jewish people have come home, and nothing will change that.
12:24 PM
lovelipby
Anti-Zionism , Fakestine , zionism