Am Yisrael remembers its heroes 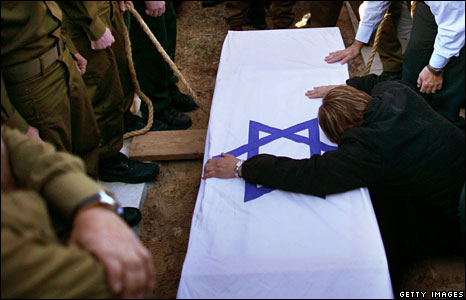 On this day, we pause to remember the 22, 570 Jewish soldiers who have fallen in the defense of the State of Israel and the Jewish people since 1860, the year the first Jews built neighbourhoods outside of the walls of the Old City of Jerusalem. Only in the merit of the sacrifice of these brave soldiers can we have a state. Their courage and self-sacrifice is testimony to the strength of the Jewish people. We bought this land with blood and fire.

When HaShem promised our Father Avraham the Land of Israel, he asked G-d: Ba'meh eda ki erashena - How will I know that I will inherit it?. HaShem answered: bazeh, with this- sacrifices. Thousands of soldiers gave their lives to liberate this land and protect their people. 61 years after the re-establishment of the State of Israel, we continue to fight and struggle. The Eternal Nation is not afraid of a long journey.
***

The Silver Salver
"A State is not handed to a people on a silver salver"
Chaim Weizmann, first President of Israel The Earth grows still.

The lurid sky slowly pales
Over smoking borders.
Heartsick, but still lving, a people stand by
To greet the uniqueness
of the miracle.

Readied, they wait beneath the moon,
Wrapped in awesome joy, before the light.
-- Then, soon,
A girl and boy step forward,
And slowly walk before the waiting nation;

In work garb and heavy-shod
They climb
In stillness.
Wearing yet the dress of battle, the grime
Of aching day and fire-filled night

Unwashed, weary unto death, not knowing rest,
But wearing youth like dewdrops in their hair,
-- Silently the two approach
And stand.
Are they of the quick or of the dead?

Through wondering tears, the people stare.
"Who are you, the silent two?"
And they reply: "We are the silver salver
Upon which the Jewish State was served to you."

And speaking, fall in shadow at the nation's feet.
Let the rest in Israel's chronicles be told.

O G-d, full of mercy, Who dwells on high,
grant proper rest on the wings of the Divine Presence -
in the lofty levels of the holy and the pure ones,
who shine like the glow of the firmament -
for the souls of the martyrs of the Israel Defense Force,
who gave up their lives
for the Sanctification of the Name
and the Conquest of the Land,
because, the entire Nation of Israel mourns for them.
May their resting place be in the Garden of Eden -
therefore may the Master of Mercy
shelter them in the shelter of His wings for Eternity;
and may He bind their souls in the Bond of Life.
Hashem is their heritage,
and may they repose in peace on their resting place.

We cannot fathom the magnitude of the loss. I would like to remember one soldier in particular, Dvir Emanuelof, the first IDF casualty to fall in Gaza. Fighting there as a staff sergeant in his infantry unit, the elite Golani brigade, he was felled by Hamas mortar fire. Though Israel has a conscript army, Dvir did not have to be in Gaza, as he had received high marks as instructor of a squad leader course, was asked to go to officer school, and would still have been in training had he accepted; he deferred, however, saying he would not be fit to command until he had first fought alongside his comrades. In fact, Dvir did not have to be in any front-line position: His father Netanel had died of cancer at age 46, shortly before Dvir's service began; as an only son in a single-parent family, Dvir was exempt under IDF rules from combat duty. Before accepting him to Golani, his commanding officer visited Dalia and asked if she acquiesced in her son's opting for a dangerous path he was not obligated to choose. Her answer: "If this is how Dvir wants to serve his country, then this is what he will do." Two days before entering Gaza, Dvir had called home and said: "Mom, I have to fight. I have to be there." He fell defending the Jewish Nation in Gaza.

May his memory, and those of all of the fallen heroes of Israel, be a blessing.