Home » Chagim » Judaism » Pesach- Our Blood is not Cheap!

Pesach- Our Blood is not Cheap! 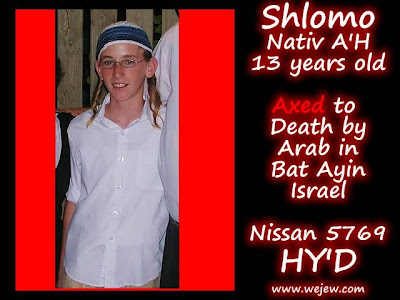 The world's silence is deafening. When Israel finally took measures to protect itself against the thousands of rockets launched against it by Hamas, protests and denunciations broke out worldwide. Thousands of people marched in the streets condemning Israel's offensive and supposed Israeli "war crimes". The media showed a constant stream of crying Arab women, injured or dead children, homes in rubble, accompanied by some Arab ranting about the evil Zionists. Despite a lack of evidence, we were treated to horrendous stories of human rights abuses, of Israeli attacks on ambulances and hospitals, of a "massacre" at a UN school. Based on hearsay and rumours, the New York Times, among many supposedly respectable newspapers, ran front page stories of testimonies of Israeli soldiers intentionally shooting innocent Arabs.

Yet when it comes to the brutal murder of a young Jewish boy by an axe-wielding Arab terrorist, not a peep is heard. Two days ago, an Arab terrorist entered the Jewish community of Bat Ayin and killed 13 year-old Shlomo Nativ, and injured another young boy. It is hard to fathom the level of depravity of someone who can look at teenager, barely bar mitzvah, in the eyes and swing an axe at his head. This is precisely what the wicked terrorist, may his name be accursed, did, nurtured and bred on the hatred and anti-semitism that permeates Arab society. This attack was barely reported in the American or European media. I saw one article hidden in the back pages of the newspaper describing the killing of "settlers", as if somehow a Jew living in Judea and Samaria legitimizes hacking him apart with an axe. The article described the community as very radical. Imagine the twisted logic- an Arab tears a Jewish child apart with an axe and the Jews are called extremists!

Israel has been so demonized and maligned by the media that it is legitimate according to many to kill Jews. A boy being slaughtered by an axe-wielding terrorist is an "act of resistance". The motivation of the terrorist, excuse me, "militant", is sheer desperation over "the occupation" and at the lack of success of the peace process. Totally overlooked is the extreme level of incitement in the Islamic world, total dehumanization of Jews and a religious imperative to slaughter them for a heavenly reward of 72 virgins.

Once again, Jewish blood is cheap. There will be no military reaction to this cruel and brutal murder. Shlomo Nativ's blood cries out from the ground, unavenged. Our "peace partners" understand this loud and clear and know that the world will not bother to lift a finger or even utter its objection to killing Jewish children. The world never changes. And Israel's lemming leaders will look beseechingly to Washington before doing anything.

On Wednesday night, Jews around the world will celebrate the holiday of Pesach which commemorates the Exodus from Egypt. As they have done for thousands of years since we left Egypt, they will sit down with friends and family and retell the story of our going forth from Egypt. For 210 years, the Israelites were oppressed in Egypt, subject to the most harsh of torments, victims of Pharaoh's Final Solution. The Israelites were so utterly degraded and humiliated by the back-breaking hardships of Egypt. If an Israelite slave could not fulfill his mandated quota of bricks, the Egyptian taskmasters would stuff his babies in the walls. Pharaoh would bathe in the blood of Jewish babies as his astrologers told him that this would cure his leprosy.

Finally, after 210 years of abject torture, the message came to Moses: "I have surely seen the affliction of My people who are in Egypt, and I have heard their cry because of their slave drivers, for I know their pains. I have descended to rescue them from the hand[s] of the Egyptians and to bring them up from that land, to a good and spacious land, to a land flowing with milk and honey, to the place of the Canaanites, the Hittites, the Amorites, the Perizzites, the Hivvites, and the Jebusites. And now, behold, the cry of the children of Israel has come to Me, and I have also seen the oppression that the Egyptians are oppressing them. So now come, and I will send you to Pharaoh, and take My people, the children of Israel, out of Egypt." (Ex. 3:7-9) No longer could G-d remain silent and keep His peace. No longer could He bear the sight of Jewish children wantonly killed, or ignore the cries of His tortured people. G-d sent a 10 plagues against Egypt, to humble them and to demonstrate His might.

The final plague that G-d sent against Egypt was the Plague of the Firstborn. G-d sent this plague against every firstborn in Egypt, from Pharaoh's firstborn to the firstborn of foreign slaves and handmaidens. Even the Egyptian slaves were included in this plague because they took pleasure at the torment of the Jews, and rejoiced as the Jews suffered. Because of this, they deserved to be punished. This is what I reply to any Jew who sheds a tear over the "innocent" Arab killed in Gaza, the same "innocent" Arab who danced when Jews were murdered in the streets of Jerusalem, in Merkaz HaRav, in Bat Ayin, in Sderot, and so forth. These Arabs who celebrate and give out candies when Jewish children are killed, on these people we can have no pity.

Our rabbis tell us (Midrash Avchir): "And Israel saw the great hand of G-d' - When the Almighty wished to drown the Egyptians, the Archangel of Egypt (Uza) said: Sovereign of the Universe! You are called just and righteous...why do you wish to drown the Egyptians? At that moment Gabriel rose and took a brick and said: Sovereign of the Universe! These who enslaved Your children such a terrible slavery as this, shall you have mercy on them? Immediately, the Almighty drowned them." Shall we have mercy on those who wish to drive us out from our land, who murder us with suicide bombings, shootings, rockets or axes? Thousands of Israelis will sit around their seder tables and look at the empty chairs of family members, absent because they were killed by Arab terrorists. The Nativ family will mark its seder without their beloved son Shlomo, because he was taken away from them by an Arab.

Every year at our seders, we pause to open the door for Eliyahu HaNavi, Elijah the Prophet, and we raise a cup and declare in full view of the nations, without shame: "Pour out Thy wrath upon the nations that know Thee not and upon the kingdoms that call not upon Thy name; for they have consumed Jacob and laid waste his dwelling. Pour out Thy fury upon them, and may the kindling of Thine anger overtake them. Pursue them with anger and destroy them from under God's skies." We pray that G-d not allow evil to continue unopposed and that the wicked gloat.

Many Jews are uncomfortable with this seemingly primitive call for revenge. We must, however, remember the words of the Passover Hagaddah, "be'chol dor va'dor - And there were those who stood up against us and our forefather, and not one alone who stood against us to annihilate us, but in every single generation, there are those who arise against us to annihilate us. And the Holy One, Blessed be He, saves us from their hands." This is not just a remembrance of a historical event. We are living this passage! Think of the 8 beautiful students killed in Merkaz HaRav, March of last year, or of Shlomo Nativ, killed only because they were Jews. How can anyone not be moved to demand that G-d repay His enemies? How can any Jew not demand that G-d bring the Redemption and usher in an era of morality, where the wicked are humbled and the righteous rewarded?

May this Pesach be a true layl shmurim, a night of protection, for the entire nation of Israel, and may we witness as great miracles as we did when we left Egypt. May we celebrate this Pesach with Moshiach Tzidekeynu, Eliyahu HaNavi and offer the korban haPesach in the rebuilt Temple in Jerusalem. May we see the Final Redemption soon, speedily in our days.
12:34 PM
lovelipby
Chagim , Judaism