The Curse of Exile 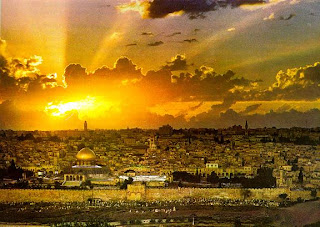 "By the river of Babylon - and Monsey, and Toronto, and Boca Raton, and London and Paris- we sat down and wept when we remembered Zion. Upon willows we hung our harps because our captors asked of us words of song, and our tormentors joy. How shall we sing HaShem's song on foreign soil?" (Tehillim 137)

Whenever a Jew has finished eating a meal, he sits down and reminds himself that he is a stranger in a strange land. He reminds himself that he was exiled so long ago forcibly from his home. He thanks G-d for the "the desirable, good and spacious Land" that He gave his forefathers. Three times a day, he turns in longing and fervent prayer to Jerusalem and pleads with G-d that "his eyes should behold in mercy [G-d's] return to Zion".

The Jewish people were chosen by G-d to be a holy people living in a holy land. We were chosen in order to bring light, goodness and G-dliness into the world, as evident by Israel's incredible Sanctification of G-d's Name in Haiti. Unfortunately, many Jews do not understand the greatness or the loftiness of our role. They do not know the Jewish people's mission or task. Throughout the long and harsh years of exile, many have forgotten or do not know what it means to be Jewish. They believe that being Jewish is simply a matter of personal conscience comparable to being a Christian or a Buddhist. They do not realize that to be Jewish is to be part of a nation.

In G-d's infinite mercy, He returned sovereignty to the Jewish people over 60 years ago and has begun the process of our Redemption. In His eternal kindness, He has brought the masses of the Jewish people back home. Entire communities en masse have made aliyah and have returned to the Land of Israel. Eastern Europe, Yemen, Morocco, Egypt, Iraq, Iran, Russia, practically all of the Jews of the Islamic world, have come back to Israel. The remaining Jews in many small and isolated communities are joining their brethren in Israel. As anti-semitism rises in France and the rest of Europe, many are beginning to come back.

And yet despite 62 years of Jewish independence, a free and prosperous Jewish state boasting one of the world's most flourishing and resilient economy, booming enterprises, a powerful army and plenty of opportunity, close to half of the world's Jews choose to live in exile. When the Jews were trapped and prevented by their gentile persecutors from making aliyah, they wrote songs of longing for Eretz Yisrael. In cellars and dark rooms, in secret, hiding in fear from Romans, Crusaders, the Inquisition, Nazis or Soviets, they declared with complete confidence and faith "Next Year in Jerusalem!". At every Jewish wedding, they crushed a glass (and continue to crush a glass) and pledged: "If I forget thee, O Jerusalem..." Now, however, that the doors of aliyah are wide open and the Land is calling out, ready to take in her long-lost sons and daughters, only a trickle decide to return home.

The Jewish people's destiny is in the Land of Israel. Only in the Land of Israel can the People of Israel achieve their true potential, to live completely Jewish lives, free from interference or insecurity. Many of the Torah's commandments can only be performed there. It is only there where a Jew does not have to live in the unnatural role of minority, with all of the insecurities that accompany it. There he is free of self-consciousness, of the ever nagging "What will the goyim think?" It is there that the Jewish people can build a Jewish society based on Jewish values. It is there that Redemption is not just a dream but a living reality.

In this week's Parsha, G-d brings upon the Plague of Darkness upon the Egyptians. Rashi explains that in that generation there were wicked Jews who did not wish to leave Egypt and that they died during the Plague of Darkness. What is the reason that these Jews did not want to escape the torment and affliction of Egypt? The Midrash Tanchuma provides us the answer: they had Egyptian friends and enjoyed honour and fortune in Egypt. These Jews felt properly at home in the idolatrous and perverse Egyptian culture and did not wish to leave in order to receive G-d's Torah and to settle in the Land of Israel. In our own generation, we see the same phenomenon repeating itself. Many otherwise good Jews, many of whom stringently keep the Torah, are simply too comfortable in the lands of their dispersions. They have their synagogues, schools and communities in Toronto, New York or Los Angeles. They are content to stay in exile and have exchanged Miami for Jerusalem.

The Jewish people must open its eyes and remember that its home is in the Land of Israel. Only there can we fulfill the prophecy that "out of Zion shall come forth Torah, and the Word of G-d from Jerusalem". No matter how comfortable exile is, it is nonetheless a punishment and a curse. A Jew should never be content living as a minority in a strange country. He must remember the lament of the Jews being taken captive to Babylon: "How shall we sing HaShem's song on foreign soil?" May Hashem open the eyes of His people that they return to their own soil, speedily in our days.
2:44 PM
lovelipby
aliyah , Eretz Yisrael , zionism