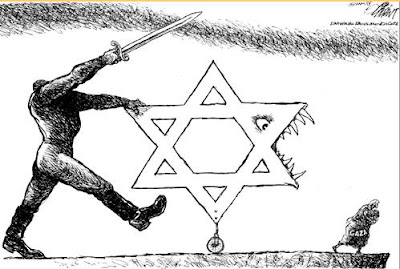 In medieval Europe, Jews were often targeted with the claim that before the Passover season, they would murder a Christian child to use his blood in their matzot and wine. This dangerous libel spread across Europe, attacking Jews in England, Germany, Spain, Russia, and even reaching Damascus, Iran and the Islamic world. The myth of the blood libel led to the pogroms and persecutions of Jews. Cults supported by the Catholic Church flourished around the "martyrs" of the blood libel, such as Simon of Trent and Little Saint Hugh of Lincoln. These blood libel accusations began to wane as the Church lost influence in Europe, yet they occasionally did pop up in Russia, Eastern Europe and Syria.

Today, this classic anti-semitic motif has been re-incarnated in a new anti-Zionist form. The common claim is that Israel has been intentionally targeting and murdering Arab children as part of some genocidal program by the Zionist entity. During the recent war in Gaza, the Islamofascist-apologist media portrayed Israel as a blood-thirsty aggressor intent on terrorizing and massacring innocent Arabs in Gaza. The Israeli operation was a delayed under-reaction to 8 years of constant rocket fire on Israel's south. The Israeli army attacked Hamas terrorist weapons caches, smuggling tunnels and training camps. According to official Israeli statistics, 709 Hamas terrorists were killed, out of a total of 1,166 casualties. Hamas and the anti-Israel media deliberately inflated the number of civilians killed in order to make Israel seem guilty of "war crimes". Ignoring the fact that Hamas intentionally chose to hide among civilians and store weapons in mosques, hospitals and schools, the number of civilians killed is relatively low and is testament to the accuracy of Israel' air force.

While the fighting raged, protesters all over the world called for Israel to "stop the killings in Gaza" (never mind the fact that they had no problems with killings as long as they were directed at Jews). It was forgotten (or conveniently ignored) who the aggressors and who the victims were. Hamas, amidst bravado of how Gaza would "be a graveyard" for the "Zionist soldiers", spoke paradoxically of the slaughter of Arabs by the Israeli army. Hamas, the terrorist organization responsible for the murder of hundreds of Israelis, whose genocidal commitments are enshrined in its constitution, quickly became the innocent victims and the mean old Zionists, the bad guys. Cynical and obscene comparisons between the Nazi murderers responsible for the annihilation of a third of world Jewry and Israel's defensive operation abounded. The Holocaust became a tool to attack the Jewish state fighting for its survival. No context was provided to the conflict as it became accepted discourse that Israel was bombing Gaza simply out of a sick and perverse desire to kill Arab children. World reaction surpassed that of the 2002 Jenin massacre that wasn't, when allegations of hundreds of Arabs slaughtered in the Jenin refugee camp spread. After a UN investigation, it was revealed that about 50 Arabs had been killed during this phase of Operation Defensive Shield, half of them armed terrorists. Of course, this did not prevent condemnation and denunciation of Israel.

Unfortunately, some Jews joined in the chorus of Israel-bashers. Consumed by guilt over everything, these Jews marched side by side with Arabs, acting as useful idiots for those who used anger over Israel's actions as a smokescreen to attack Jews. These self-haters, such as Roseanne Barr and Gerald Kaufman, repeated the tired fallacy that the Israel army and the Nazis are interchangeable, lending credence to the anti-semites' claims. Incredible that while the Jewish state was fighting for its life, these kapos would choose to condemn it. This phenomenon of self-hatred is limited to Jews. Never will one find an Italian obsessed with hating and condemning Italy, or an "Arab against Palestine". Tragically, 2000 years of exile have poisoned the minds and hearts of far too many Jews, people who do not identify as Jews unless to lend support to their bigoted views.

Even supporters of Israel fell for this libel, apologizing over and over again for "killing innocent civilians". The pro-Zionist argument went like this: "Its a shame about the civilians deaths in Gaza, but..." The destruction of one's enemy is not supposed to be something painful or shameful. War is cruel and civilians die. The people of Gaza were not innocent by any stretch of the imagination. In 2006, the majority of the people in Gaza voted democratically to have the Hamas terrorist organization represent them. They permitted their homes and towns to be used as rocket launch pads against Sderot, Ashkelon, Ashdod and the Negev. They danced in the streets and gave out candy when 8 teenagers were shot in cold blood by an Arab gunman last March in a Jerusalem yeshiva. They have held Gilad Shalit captive for 1000 days without Red Cross humanitarian access They have built a perverse society built on hatred, anti-semitism and love of martyrdom and death. In short, their suffering, as all Arab suffering, is self-imposed, a result of their rejectionist policies. They chose the rocket over the olive branch and war over peace and they are now paying the price.

In WWII, the Allies went on a bombardment campaign of German cities. The people they killed were not Wermacht generals, Gestapo police or members of the German army. The Allies did not limit their attacks to Hitler and his Nazi regime but to the German people who voted in and supported the Nazi beast. No tears were wasted on those killed in the bombardment and similarly, Jews should spare no tears on those killed in Gaza. The "innocent civilians of Gaza" were the same ones who helped Hamas, who are totally committed to the destruction of Israel and who rejoice when Jews are murdered. These "innocents" are the same ones who kidnapped Gilad Shalit and have kept him in a cell for 3 years. With such a surplus of Israel-bashers, we need not join in.