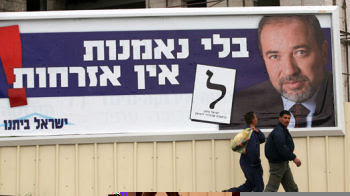 In the recent Israeli elections, Avigdor Lieberman's party, Yisrael Beiteinu, won 15 seats in the Israeli Knesset. The party slogan of "no citizenship without loyalty" resounded with Israelis after they saw Israel's Arab citizens cheering on Hamas during the latest conflict in Gaza. Lieberman capitalized on the treasonous words and actions of "Israeli"-Arab MKs and on the general perception of Israel's Arab population as a fifth column. Speaking about Arab MKs, among them one who fled to Syria trying to escape charges of treason, Hamas and Fatah supporters and sympathizers, and several who have repeatedly met with Israel's enemies, while receiving salaries from the state, he said:"At the end of the Second World War, not only criminals were executed in the Nuremberg trials, but also those who collaborated with them. I hope that will be the fate of the collaborators in this house."

Every year, as Jewish Israelis take to the streets to celebrate their Independence, Israel's Arab commemorate "Nakba" (Disaster) Day. On this day, they mourn, condemn and resolve to eliminate the state in which they are living and which gives them full democratic rights. Jewish Israelis are angered when they see people who are given more rights and privileges than any other Arabs in other Arab countries opposing the state. While there is certainly no reason to allow "Nakba" commemorations on Israel's Independence Day, it is quite hypocritical for Jewish Israelis to expect Arabs to dance and celebrate on Yom HaAtzmaut. It was recently reported in the newspaper that an Arab minister refused to sing Israel anthem, "HaTikvah". Understandably, Jews were furious that a minister in the government would refuse to sing the national anthem yet it seems unreasonable to expect an Arab to sing of the continuation of the 2000 year old hope, beating in "the Jewish soul", "to be a free nation in his land, the land of Zion and Jerusalem".

No state is under any obligation to support and allow a fifth-column in its borders and I have no sympathies for the Arab citizens of Israel who took to the street to proclaim their admiration for Hamas. After a several terrorist attacks in Jerusalem, such as a massacre of yeshiva students and several bulldozer and vehicle attacks, by Arab residents of east Jerusalem, which were greeted by jubilation and rejoicing by the Arab citizens of Israel, few would argue that the Arabs are loyal citizens. In the words of "Israeli"-Arab protesters at Hebrew University: "we are all Palestinians now". There are no questions as to the identity of Israel's Arabs. Nonetheless, I feel that Lieberman's slogan misses the point. An even greater threat, in may ways, to Israel's continuity as a Jewish state, than the Arabs are the hundreds of thousands of Russian goyim brought from the former Soviet Union. Many of them are proud citizens, serve in the army, pay their taxes and support the state. Yet, despite all of this, they are not Jewish. Many of Lieberman's constituents are Russian immigrants who are not Jewish according to Jewish law. To appease them, some of his policies advocate a quickie conversion process, civil marriages, increased public transportation on Shabbat and allowing the sale of pork, all things that would hurt the Jewish character of the state. The loyalty of these Russian goyim cannot be questioned (excluding the neo-Nazis, I suppose) but they still cannot be considered full citizens since they are not Jewish. Liberman's proposal implies that Russian goyim, Arabs, Bedouins or Druze, if they sign a declaration of loyalty to the state, will be no different than other Israel. That is, in effect, a recipe for assimilation.

Israel was founded to be a Jewish state, to provide a homeland for the Jewish people. While Israel is a democratic country, to qualify as a Jewish state, it must have some sort of Jewish character. This includes the public celebration of Jewish holidays, stores and transportation closing on Shabbat, restrictions on the sale of pork, and the Rabbinate's control over the Jewish life cycle, such as wedding, births, funerals and burials. Around the world, Jewish communities are withering up and dying, with the exception of religiously-committed Jews, due to a frighteningly high intermarriage rate. Israel is (with the exception of Canada and Germany) the only Jewish community that is growing because of a normal and healthy birthrate. Judaism is blossoming and undergoing a revival in Israel, its birthplace. Lieberman's suggestions that being Israel simply depends on allegiance to the state are very, very dangerous for Israel's Jewish nature. He will import the Diaspora assimilation catastrophe to the Holy Land. 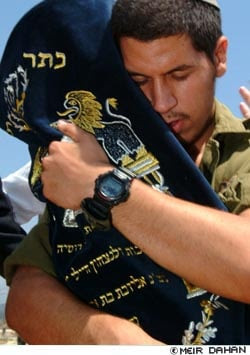 An Arab cannot feel loyalty to the state that officially calls itself "the Jewish state", whose flag has a Jewish star at its center, whose anthem speaks of "the Jewish soul yearning". He cannot celebrate on the day which he was defeated, on which he feels (wrongly) that his land was taken away from him. To demand for him to give up his national pride and aspirations and sign a declaration of allegiance is simply condescending. The plans and attempts to turn Israel into a Western Hellenistic country and to divorce it from its Jewish heritage must be rejected. No matter how loyal a Druze or a Russian goy is, they are not Jewish and cannot marry a Jew. If the condition for "Israeli-ness" is mere loyalty, it will break down all boundaries between Jews and non-Jews, the boundaries that prevent intermarriage and guarantee Jewish survival. I do not argue with the truth that the Arabs must go, that Israel cannot allow a growing and hostile minority to attack Jews, aid Islamic terrorists and plot our destruction from within. The essential is to return to our Jewish roots, to realize that by running away from Judaism, we run away from Zionism. There is only one justification for building a Jewish state in the heart of the Arab world, in the middle of a billion Muslims. Why suffer and fight for this little piece of land if all we want is a good quiet life, to go to the beach, to shop, club and enjoy? There are close to a million Israelis living in NY, LA, Florida or in other warm places. The only reason for the state is Judaism: to build a Jewish country in its ancient homeland. Israel is both Jewish and democratic, but both of these are not of equal importance. The world has many liberal, multicultural, secular democracies. Creating another one is not sufficient cause to antagonize half of the world's population. Israel's basis is firmly rooted in Judaism. Judaism demands separation from the nations, not to allow ourselves to assimilate and disappear. Lieberman's plans remove any concept of Torah or mitzvot from being a Jew, or being an Israeli. They are in fact suicide for Israel. A far better slogan would be: "The Nation of Israel, in the Land of Israel, according to the Torah of Israel."
1:10 PM
lovelipby
Anti-Zionism , Israeli Ar`bs , Jewish Israel , Judaism , Loyalty , zionism