A Soldier and an Old Woman 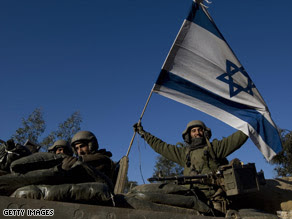 From Aish by Ruchama King Feuerman

The Six Day War had ended. The generals assembled the commanders and foot soldiers for a customary review and analysis of the battle. After the military questions had been asked, and the investigative committee was about to disperse, a commanding officer pointed to one of the soldiers. "Wait a minute. I have a question for you. Yes, you, the soldier who put up the flag on the Temple Mount."

"Where did you get an Israeli flag, and why did you put it up?"

The soldier spread out his hands and smiled, a gesture that indicated that here was more than just a one sentence response. He told the following story:

The night before the Old City was liberated, a contingent of soldiers fighting near the Old City took cover in a shelter in a Jerusalem neighborhood. Hordes of children, mothers, old men and women packed inside the bunker alongside the soldiers. People looked frightened and bereft. The government had imposed a news black-out so that the Arab countries wouldn't be able to figure out their positions. And the news -- originating from Jordan, Egypt and Syria -- was enough to induce hysteria: calls from Saudi King Faisal for the total elimination of Israel, calls from every Arab country to push the fledgling country into the sea.

Things looked so bad, Israelis famously converted public parks into mass graves, in preparation for the expected casualties. (Israel's Chief of Staff, Yitzchak Rabin, had even suffered a nervous breakdown.)

As the soldier sat there in the bunker, hopeless and uncertain, he saw an old woman slowly make her way over to him. "Excuse me," she said, standing at his side. She held a satchel in her arms.

He shook his head at the absurdity. He said, "No, we won't." There were no army plans to liberate the Old City. First, they were fighting just to hold their positions. Also, overtaking the Old City would entail hand-to-hand combat which was greatly feared: Many people would die. Moreover, any bombardment of the Old City might demolish even more of the holy sites than had already been destroyed by the Jordanians. He tried to explain all of this.

The old woman looked at him, steady-eyed. "No, you will go," she said, not as if she were trying to convince him, but as if relaying simple facts.

He shrugged. An old woman's delusions. He wasn't going to argue with her.

Before he turned away, she said, "I have a favor to ask you." She reached into her satchel and took out an Israeli flag. From the way she touched it, it was clear the flag had some personal meaning for her. Had she made it? Perhaps it had been draped over a loved one's grave? But what was she now saying? "When you go, please take this flag, and when you get to the Temple Mount, I want you to hang it up there." She held out the flag.

The soldier repeated, "We're not going into the Old City."

"You're going," she said. Again, she held out her arm.

A thought struck him. "I can't take it," he told her. "It's against army regulations."

"I'll get in trouble. You're only allowed to carry a few specified items."

Please," she said hoarsely. "Do me this favor."

He shrugged again. Why was he arguing with this old woman? Let him take the flag, let him make an old woman feel good. He could always get rid of it later.

The next day, the Israeli army, contrary to everyone's expectations, took the Old City. Sure enough, the soldier's unit ended up at the Temple Mount. As he and the other soldiers came close to the Western Wall, he suddenly remembered the flag and the old woman's words. Yes, he would do it, he would! He enlisted two buddies, and together they draped the flag over the grating on the upper left most side of the Kotel, and there they hoisted and hung the Israel flag.

The commanding officer conducting the investigation said to the soldier, "And what were you thinking when you put up that flag?"

The soldier said, "I was thinking that this was the answer to 2,000 years of Jewish suffering."

And so ends the story of the soldier, our hero.

But there's an unsung hero, too. What about the old woman who supplied the flag? One wishes the investigating officers had tracked her down. What did she have in mind as she entered a shelter with an Israeli flag in her satchel? And who was she, anyway? The only identifying feature is that she was old and carried a bag. But her advanced age already tells us plenty: that she knew something about Jewish history, probably having personally lived through it...World War I, Arab attacks, the Holocaust, the War of Independence, 1956. What hadn't she seen?

There, in Israel's darkest moment, outnumbered and surrounded by enemies, terrified that the next morning there will be no Israel, the old woman sees what no one else can see, what no one else is capable of conceiving. She insists on her vision, she practically browbeats the soldier into carrying out her plan. We'll never know how she knew, only that, like many Jewish women before her -- the Matriarchs, the midwives in Egypt, the righteous women in the desert -- she just knew. There are two kinds of prophecy. One that predicts the future, and one that makes the future.
1:22 PM
lovelipby
IDF , Jerusalem , jewish history , Jewish Israel , zionism