Monday night, the 27th of Nissan, is Yom HaShoah v'Hagevurah, Holocaust and Heroism Memorial Day. On this day, we bear witness to the worst crime in human history, to the unfathomable murder of 6 million Jews of Europe, 1.5 million of them children.

The Holocaust did not begin with gas chambers or crematorium. The road to Auschwitz-Birkenau was a gradual process, one that began with the delegitimization and isolation of Jews from general society. The Final Solution, which almost completely wiped out European Jewry, began with words of hatred and intolerance. It began with the demonization of Jews as disloyal to their countries, foreign parasites destroying the culture, race and homeland from the inside. Children were taught in schools that Jews were the enemies of the Aryan race, and in the papers, on the radios and in speeches, Jews were denounced. Before official government policies could separate and ostracize Jews, Nazi propaganda made them persona non grata, completely loathsome and rejected by German society.

Singled out for persecution, Jews were forced to wear yellow stars on the clothes. Restrictions were imposed on where Jews could go, what they could own and where they could work. They were completely separated from society at large. Jewish businesses were boycotted and German who patronized them were humiliated. This process of state-sponsored hate exploded into a full-fledged government-initiated pogrom on November 9th, 1938, Kristallnacht. On this Night of Broken Glass, SS thugs murdered 91 Jews, vandalized tens of thousands of Jewish businesses, destroyed 200 synagogues across the Reich and sent 25 000- 30 000 Jews to concentration camps. This marked the beginning of the end of the Jews of Europe, and beginning of the Final Solution. It was no longer sufficient to burn Jewish books, businesses and synagogues, but to burn Jews themselves.

The Holocaust was not a German crime against the Jewish people- the Eastern European nations, the Litvaks, Poles, Ukrainians, Serbs, Croats, etc. happily became Hitler's willing executioners. The Holocaust was a conspiracy of silence against the Jews, as half of the world actively murdered Jews while the other half shut its eyes and ears to their cries. Just as the Jews of Germany were searching for safe havens to flee to, the world closed its doors. The United States imposed strict quotas on immigration. Canada's response to the numbers of Jews to be allowed in was "none is too many". The British, succumbing to Arab pressure, led by the Mufti of Jerusalem and Hitler-admirer, Haj Amin al-Husseini, may his name be accursed, shut firm the gates to the Land of Israel. Jews who had escaped on ships such as the St. Louis were turned back to, sent to Hitler's infernos. Seeing that the world was simply not interested in helping Jews, Hitler realized that he would have no opposition in implementing the Final Solution.

The entire German state apparatus devoted itself to systematically and bureaucratically rounding up, rooting out and exterminating every single Jew in Europe, and eventually around the world. The German PhD's used their expertise to further the goal of making Europe judenrein, German engineers built factories of death and German doctors and scientists devised ways of turning Jewish skin into lampshades and Jewish bones into soap and fertilizer. From as far south as Greece and as far north as Norway, Jews were transported to their annihilation in the death camps of Poland. Entire Jewish communities were snuffed out in these factories of death, their names living on in infamy: Auschwitz-Birkenau, Treblinka, Majdanek, Sobibor, Belsec and Chelmo.

In these gas chambers and killing fields, a culture was murdered. Some of these communities were ancient, millennia old. Old and well-established communities, such as the Sephardic Jews of Saloniki, Bulgarian Jews, Polish and Italian Jews, were completely decimated. Two thousand years of Jewish life in Europe was erased. Fortresses of Torah Judaism, good pious Jews were destroyed. Nothing we have today even compares to the depth and vibrancy of Jewish life in pre-War Europe. Today, beautiful and majestic synagogues sit abandoned and derelict as their congregants are ashes in the fields and forests of Poland.

Incredibly, barely 60 years since the world closed its eyes to the plight of the Jews caught in the fires of Nazi Final Solution, Jews are once again targets of hatred and anti-semitism. This year, due to the economic crisis and conflicts in the Middle-East, has seen the worst outbreak of anti-semitism since before Kristallnacht. The ferocity of this renewed hatred manifested itself in the self-righteousness and hypocritical protests around the world in support of Hamas and against Israel. While Israel was bombarded with 10 000 rockets, the world kept silent. Not a peep was heard over the Russian bombings of Chechnya, the US in Iraq or Afghanistan or the genocide in Darfur. Yet, when Israel finally decided to launch an offensive to end constant rocket fire, hateful and violent rallies were held worldwide. Crowds in Europe, North America and the Islamic world equated today's Jews with their 20th century executioners, all while screaming things like: "Hamas, Hamas, Jews to the gas!" and "Death to the Jews!". Jewish institutions around the world, synagogues, businesses and schools were vandalized and attacked. In January, while Israel was fighting against a terrorist organization in Gaza, over 250 anti-semitic incidents were reported worldwide. In Toulouse, France, assailants rammed a burning car into the gates of a synagogue, causing damage but no injuries. That same day in southern Sweden, a Jewish congregation was attacked when someone broke a window and threw a burning object inside. In the United States, vandals used shaving cream to paint swastikas on a Malibu Jewish Center and Synagogue, and shattered one of its windows in mid-January. On one sabbath, 4 synagogues in Chicago were defaced. France saw an explosion of anti-Jewish attacks. The incidents included a stabbing of a a young Jewish man by two masked car thieves outside Paris, and two firebombing attacks against synagogues in Saint Denis, a northern suburb of Paris, and in Strasburg.

Israel has become the proverbial Jews among the nations. "Zionism" has replaced the defense of the Aryan race as the rallying cry of that so offends anti-semites. Alone of all the national liberation movements around the world, Zionism is singled out and defamed as "racist". Israel, the state that arose like a phoenix out of the ashes of the Holocaust, has never been subjected to such vile hatred. This very hatred made a Jewish state necessary, after the world stood idly by as the Jews were rounded up and murdered, powerless, during the Holocaust. On college campuses across the United States and Canada, there was a week-long hate-fest of "Israeli Apartheid Week". In York University in Ontario, crowds surrounded the Hillel House (Jewish student organization), besieging and trapping the Jews inside, while screaming: "Die Jews!". The legitimacy of the Jewish state is constantly challenged, 61 years after its founding, by denying the Jews the right to self-determination, or that they even constitute a nation. Beginning April 20th (ironically, Hitler's birthday), the UN will convene in Geneva to have a follow up to the 2001 Durban Conference in Support of Racism and Anti-Semitism. At this conference, the Jewish delegates were abused and attacked. Protesters compared Israel to apartheid South Africa and Nazi Germany, while selling copies of the Protocols of the Elders of Zion and Mein Kampf, and bemoaning that Hitler didn't finish the job.

Israel has become a pariah in the international community. Hatred for Israel has allowed anti-semites to justify and explain away every single Arab excess and act of terror, every single brutal murder of a Jew. Teenagers gunned down in a yeshiva studying Torah or axed to death, Israelis blown to smithereens by Hamas rockets, all of these are legitimate targets. "Occupation", "racism" or the failure of the "peace process" are valid reasons for an Arab to crush mothers and babies with a bulldozer on the streets of Jerusalem. Settlers, after all, deserved it.

The world, and unfortunately Jews as well, have not learned from history. Just as Nazism began with the Jews but threatened the entire world, so does radical Islam today. Israel is the canary in the coal mine. It always begins with the Jews but never ends with the Jews. It seems that, for the Jewish people, its is 1939 again as we find ourselves unwelcome in a growing number of countries. In Venezuela, armed thugs broke into a synagogue, scrawled "Death to the Jews" on the walls, defiled the Holy Ark and stole information regarding the synagogue membership, right after the President of the country denounced and accused the Jewish community. The only difference today is that we have a state and an army and we will not allow ourselves to become victims again. Never again will we wait in vain for bombs on gas chambers that never came, or for the world to rescue us. History demonstrates that the world is blind and apathetic at best to the suffering of Jews. As the witnesses to Hitler's crime are slowly dying out, we must stand us and say: Never again! Never again will our blood be cheap, will we be persecuted and killed wantonly. 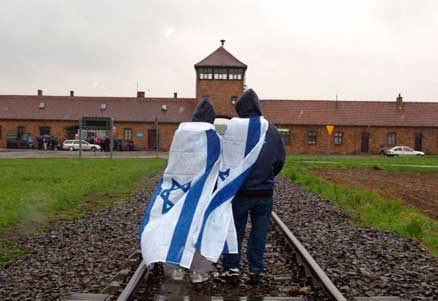