The Real Meaning of Never Again

"We, pilots of the Israeli Air Force, flying in the skies over the extermination camps, arose from the ashes of the millions of victims, carrying their silent cries, saluting their bravery, and vowing to be a shield to the Jewish Nation, and to its Land, Israel."

An oft-repeated cliche repeated by both Jewish leaders and the international community is that of "never again". Presidents and Prime Ministers visit Yad VaShem, pay tribute at Holocaust Memorials and shed crocodile tears over the Jews murdered in the Holocaust, while proceeding to condemn and attack Israel. The same leaders that stood silently in commemoration of the Holocaust denounced Israel with the most hateful vitriol during its moment of greatest need, as it was fighting to defend itself and its citizens. Never again, they pledged. Never again? Is that really so?

The Holocaust teaches many universal messages. It teaches mankind to be ever vigilant against the forces of hatred and intolerance, whenever they arise against any people or group. It warns us never to allow bigoted speech and ideas fester and grow. It shows the ease with which an entire nation can descend to the depths of depravity and immorality. Yet, for the Jewish people, the Holocaust has one sharp and poignant message: Never again to be weak.

Since the destruction of the Second Temple, for two millenia, Jews lived as strangers in foreign lands, minorities under the rule of others. In Christendom and in Islamic lands, Jews were forced to lived in ghettos, mellahs or juderias, to wear distinctive and humiliating clothing, had restrictions on their professions and employment and endured severe discrimination. Jews were at the mercies of the lords of the land and had to comply with their wishes, whether it be being forced to hear a conversionist sermon delivered by a priest in a synagogue on Shabbat, or to pay a jyziah tax in a debasing ceremony to their Muslim overlords. Jews were spat upon and cursed, beaten and abused at will. The two thousand years of Jewish life in Europe and the Middle-East, with the exception of occasional periods of prosperity and tranquility, was marked with constant fear and insecurity. Ravaged by pogroms and Crusades, Inquisitions and forced conversions, massacres and jihads, Jews lived with their lives always hanging in a narrow balance. A new king or pope, ruler or clergyman, could put the Jews in peril.

In this climate of ingrained loathing and despising of the Jews, Hitler came along. He used the traditional anti-semitic motives of the Catholic church as well as new anti-semitic racial theories to stir up the people's hate. The policies of the Nazi Regime, even before the Final Solution to the Jewish Problem was implemented, were designed to crush and dehumanize the Jews. The Jew looked in trepidation at the Nazi brownshirts, Gestapo and SS, unable to defend or stand up for himself. Like animals, Jews were crammed into cattle cars, suffocated in gas chambers and burnt in ovens. The Nazi beasts could not have accomplished their genocide without the help of their Polish, Lithuanian, Ukrainian, Hungarian, etc. collaborators and executioners. Nor could they have managed without the world's silent approval. The Pope looked away when the Jews of Rome were rounded up from under his very window. Roosevelt, Stalin and Churchill all knew about the death camps, about the killing fields and mass graves in the Ukraine, about the gas chambers and crematorium in Poland, yet closed their doors to Jewish refugees. Allied bombers flew over Auschwitz but the military didn't see the use of bombing the train lines. As Jews needed a place to flee to, the British, at the urging of the Arabs and the Nazi-collaborator Haj Amin al-Husseini, may his name be accursed, prevented Jewish aliyah to the Land of Israel, and even sent refugees back into the hands of the Nazis.

Just yesterday, on Holocaust Memorial Day, a group of partisans who fought the Nazis in the forests of Europe, visited an IDF air force base. One woman asked an officer in our air force if our pilots could reach Iran. "They can reach anywhere," he answered. This answer, powerful and moving for its simplicity, conveys the true meaning of never again. Never again will we wait in vain for Allied planes to bomb the gas chambers. Never again will we wait for world aid which did not come. Never again will we allow ourselves to be weak, to be victimized, to be powerless. Never again will we accept any conditions on where we can live, what we can wear, on our professions or possessions. Never again will we be at the mercies of the gentiles, begging for our lives. This pilot was saying that we may have been 60 years too late for the Jews of Europe, but we were not too late for the Jews of Yemen or Ethiopia. Never again will we be too late! We may not have been able to save the Jews of Warsaw, but our planes reached Iraq and Entebbe. Our planes can fly to Lebanon or Gaza, and they may yet fly to Iran, destroying the enemies of the Jewish people. We will not stand idly by our brothers blood, whether they are being rounded up and deported to annihilation, living under constant bombardment and rocket attacks or in the shadow of a nuclear attack. We know that the world abandoned the Jews to their fate, that deals were not made and safe havens closed off. Today, we can reach anywhere.

Another survivor made her own request of the air force of Israel, "What I ask of you is to make sure that there will not be another Holocaust." As long as brave Jewish men and women don the uniform of the Israeli Defense Force and protect the Jewish people from on land, sea and air, there can never be another Holocaust. We have learnt the terrible price of being weak. Being defenseless and without a homeland came at the horrendous cost of a third of our nation. The hatred of the world for the Jews has not diminished one iota since the trains came to a halt and the crematoriums stopped giving off their accursed smoke. Across Europe and North America, in public forums and university campuses, the Jewish State is being delegitimized and marked as a pariah. We must not heed the words of these haters for we know too well how dearly we pay without a state of our own. The only thing that stands between us and Auschwitz-Birkenau are the soldiers of the IDF. Those who condemned the army going in to Gaza must know that they only went in there to protect and defend the Jewish people. They are what keeps us from the narrow brink, from the mound of ashes at Majdanek, from the halls of shoes and piles of hair. To the Jews of Europe, massacred because of the world's apathy and our own weakness, scattered in the forests of Teblinka, the fields of Birkenau or the mass graves of the Ukraine, we promise never again to be weak, to allow ourselves to be bullied and beaten. For this is the true meaning of "Never Again". 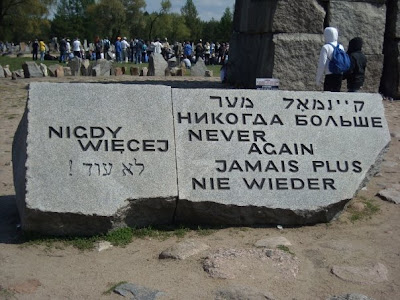