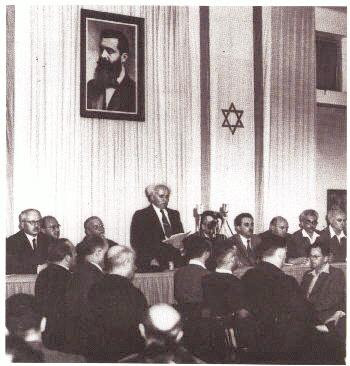 On the 5th of Iyar, 5708 (1948), G-d's Name was sanctified. For the first time in two thousand year, the Jewish people had a state in their homeland. Two millenium after the Roman emperor Hadrian burnt our Temple, razed Jerusalem, sold the Jews into slavery and arrogantly declared 'Judea capta! (Judea is captured), the Third Jewish Commonwealth was established. After centuries of oppression and persecution, Crusades and pogroms, Inquisitions and Holocausts, the Jewish people had finally returned home to the land of their forefathers.

When the Romans crushed the Jewish rebellion in 70 CE and destroyed the Temple, they carried out the majority of the Jews into exile. They built a huge victory arch in Rome showing the Temple utensils being taken as spoil. The Romans minted coins depicting a conquered a mourning Jewess, along with the words 'Judea capta'. In their minds, the Jewish people had been crushed. The Roman Catholic Church, which became the official religion of Rome, taught as doctrine that the Jews had been replaced and rejected by G-d, never to return to Israel. The Church, along with the scholars of Islam, mocked the Jews and taunted them over their abasement, claiming that their continued exile was proof of their replacement in G-d's eyes. Incredibly, while the Roman empire today is nothing but dust, Jews are once again living in the Jerusalem, the city of King David, in Judea and Samaria, where the Patriarchs lived and in the Galilee, where Bar Kochba and his brave Zionist rebels fought for liberty.

"A song of ascents. When the Lord returned the captivity of Zion, we were like dreamers. Then our mouths were with laughter and our tongues with songs of praise; then they will say among the nations, "The Lord has done great things with these."" (Tehillim 126) Truly, we were like dreamers. Is there any clearer proof of G-d's sovereignty and majesty, of His guiding hand in history, than in the survival of the Jewish people in graveyards of the exile and in our return to the Land of Israel? Has there ever been such a thing in the entire annals of mankind, for a nation to have survived the sword and the stake, the racks of the Inquisition and the Crusading lance, the Cross and the Crescent, the killing fields and the gas chambers, to be returned home? Only by the might and mercy of G-d, through the brave pioneers and committed Zionist leaders, were we able to revive our ancient language, Hebrew, to re-settle the desolate cities, drain the swamps and make the deserts bloom. "For the Lord shall console Zion, He shall console all its ruins, and He shall make its desert like a paradise and its wasteland like the garden of the Lord; joy and happiness shall be found therein, thanksgiving and a voice of song." (Yishayahu 51:3) The land, empty and desolate, bereft of her children, which called out longingly for them for over two thousand years, now blossoms and is settled. For too long did Zion cry out for her sons and daughters in captivity, trampled on by a foreign oppressor.

From the four corners of the Earth, the Jews have begun to return home. "Fear not for I am with you; from the east I will bring your seed, and from the west I will gather you. I will say to the north, "Give," and to the south, "Do not refrain"; bring My sons from afar and My daughters from the end of the earth."" (Yishayahu 43:5-6) Out of the mellahs of Morocco and Tunisia and the shtetls of Russia and Poland, Jews came home. The same Jews who declared year after year their fervent hope and desire of 'Next Year in Jerusalem!' were privileged to see their dream become a reality. From the farthest and most remote reaches, the Land of Israel beckoned Jews home. Jews from Yemen and Ethiopia walked thousands of miles, trekked through dangerous deserts and hazardous terrain, braved intense dangers because they senses the impeding Redemption. When the Iron Curtain fell, the cry of 'Let my people go!' saw fruition as millions of Russian Jews fled the prison that was the Soviet Union and came to Israel to live lives of dignity and freedom. The Ingathering of the Exiles has begun as Jews from Iran and Turkey, Greece and Lithuania, Ukraine and Hungary, India and Afghanistan now live, mix and mingle, in peace together in the State of Israel. 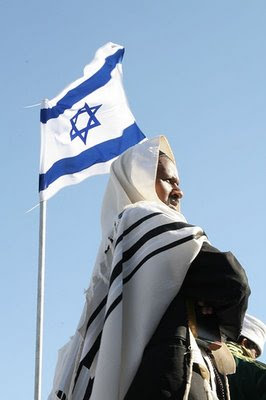 In fire and blood Judea fell and in fire and blood Judea arose. In 1948, and again in six spectacular days in 1967, the myth of the passive Jew whose life was cheap and blood was the gentile's for the taking, was forever crushed. The nation that for so long had been associated with sheep to the slaughter, with massacres and weakness, had arisen like a lion and fought for its life. In 1948, one million crack Arab soldiers, dedicated to driving the Jews into the sea and destroying the fledgling state, were attacked the 600 000 inhabitants of the Jewish yishuv. Just as in the days of David and Goliath, the defenders drove the enemy out. The defenders were outnumbered, farmers and citymen, Holocaust survivors given a rifle as they got off the boat. Some come with horses and some come with chariots but we invoke the name of HaShem our G-d! As the ovens and furnaces of Europe were still giving off their horrible stench, as the smoke was still emerging from the chimneys of Auschwitz, the Jewish state had arise with strength and power. The dry bones that had been murdered and annihilated in Europe had been reborn in the Land of Israel. ""Son of man, these bones are all the house of Israel. Behold they say, 'Our bones have become dried up, our hope is lost, we are clean cut off to ourselves.' Therefore, prophesy and say to them, So says the Lord God: Lo! I open your graves and cause you to come up out of your graves as My people, and bring you home to the land of Israel. Then you shall know that I am the Lord, when I open your graves and lead you up out of your graves as My people. And I will put My spirit into you, and you shall live, and I will set you on your land, and you shall know that I, the Lord, have spoken it and have performed it," says the Lord." (Yechezkel 37:11-14)

61 years after the awesome day in Tel-Aviv, we can sit back and feel pride over our many accomplishments. The Jewish language, Hebrew was revived, a feat never before accomplished. Cities and settlements were created. A vibrant and modern democratic state was built. Israel has one of the best and most powerful armies in the world. Close to half of the world's Jewish population now lives in the Jewish state. Israel is a world leader in science and technology and contributed a disproportionate amount to high-tech, medicine and science worldwide. Despite all of Israel's many problems, it has accomplished more in its mere 61 years of existence than most other countries around the world. The State of Israel is far from the fulfillment of the Prophets and there is a long journey to the Ultimate Redemption. Yet, in the words of Herzl: "If you will it, it is no dream." Just as it seemed impossible for there to be a sovereign Jewish state, as it seemed impossible for Jerusalem to be reunited as the capital of the Jewish people, so too will we reach all of our goals. A nation that waited two thousand years to return home is not afraid of a long and difficult struggle.

"Behold days are coming, says the Lord, that the plowman shall meet the reaper and the treader of the grapes the one who carries the seed, and the mountains shall drip sweet wine, and all the hills shall melt. And I will return the captivity of My people Israel, and they shall rebuild desolate cities and inhabit [them], and they shall plant vineyards and drink their wine, and they shall make gardens and eat their produce. And I will plant them on their land, and they shall no longer be uprooted from upon their land, that I have given them, said the Lord your God." (Amos 9:13-15) May we see the complete fulfillment of the Jewish Dream, of the Prophets of Israel, of a world where "out of Zion will go forth Torah, and the word of HaShem from Jerusalem", very soon. May we merit the day when "nations will not lift up swords against each other, neither shall they learn war anymore". May the Complete and Final Redemption come speedily in our days, in mercy and love, amen!
4:32 PM
lovelipby
ahavat yisrael , Jewish Israel , Judaism , moshiach , Yom Haatzmaut , zionism